A Tale of One City 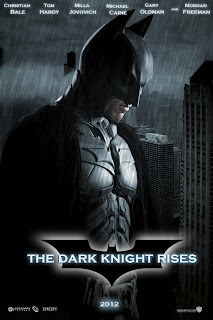 I watched "The Dark Knight Rises" this weekend. I found myself thinking about the quality of the writing a lot more than I ever used to. I've always liked to dissect movies afterward with my friends, discussing why this or that happened, and wondering "What did that mean?" But now that I've been focusing so much on crafting a story and making it the best it can be, I am even more critical of storytelling. This movie did not disappoint.
In this film, Batman/Bruce Wayne (Christian Bale) faces his greatest challenges yet, and comes to the brink of defeat and despair. He is challenged to his limits physically, mentally, and emotionally. In one scene, he quite literally climbs out of a pit of despair.
The movie opens with the legacy of Harvey Dent. Due to the "White Knight's" efforts, most of Gotham's worst criminals are in prison with no hope of parole, leaving little for the police force to do, and nothing for Batman to do. Accordingly, Batman has not been seen in years. However, as Selina Kyle (Anne Hathaway) puts it, "There's a storm coming, Mr. Wayne. You and your friends better batten down the hatches, because when it hits, you're all gonna wonder how you ever thought you could live so large and leave so little for the rest of us."
Bane's takeover of Gotham City, ostensibly so the people can "take control" for their "liberation" reminded me strongly of the French revolution in "A Tale of Two Cities." Anarchy sounds good to some--rule of the people with no one to answer to--but in reality it becomes might makes right. Just take a look at the "choice" of sentencing the kangaroo court offers to those whom they have already found guilty without a trial.
Director Christopher Nolan has been quoted as saying that this will be the last Batman movie he will make, but the ending was still left open for a possible sequel starring a different main character. I can't say anything more for fear of giving away too much.