Review of Brigitta of the White Forest by Danika Dinsmore 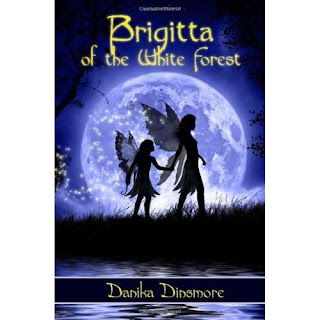 I really enjoy a good solid quest story, where an unlikely--even unwilling--hero goes on a journey to find the talisman or magic needed to save the world. Brigitta of the White Forest is such a tale.
The writing style is engaging and professional, drawing the reader in and holding attention. The main characters, Brigitta and her little sister Himalette, are very real; they act just like real sisters. Although, I have to admit that my favourite character is Minq. I love his ears!


There's nothing really new here, except that the main characters are winged faeries, which is interesting, but doesn't really add that much to the plot. That's okay, though, as it is a good solid plot and is written in an enjoyable style. Sometimes you don't need anything new.


All in all, I recommend this novel for fans of fantasy.
Posted by Esther Jones at 5:26 PM 2 comments:

Review of The Dragon and the Crow by T. B. McKenzie 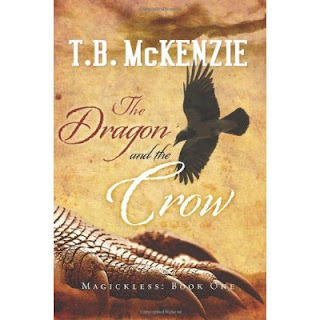 I won The Dragon and the Crow by T. B. McKenzie in the first challenge of Rachel Harrie’s Writing Campaign. Sometimes, it was difficult to put down, while at other times, I found myself setting it aside and taking a moment just to process what had just happened. The story is fascinating and the twists and turns kept me interested all the way to last sentence—which was a shocker.
Usually, the main character of a fantasy story is some of kind of “chosen one” with “power the dark lord knows not.” In The Dragon and the Crow, Brin lives in a world where everyone has magic—everyone but him. This is an intriguing concept, turning our expectations on end.
The plot also turns our expectations on end—repeatedly. I couldn’t keep track of how many times, I said to myself, “Oh, wait. That’s the good guy and that’s the bad guy… no, it’s the other way around!” I love this kind of twisting, turning story where the characters aren’t just good or evil, but human and flawed.
There are some awkward phrasings and word choices throughout, and even some spelling and grammatical errors, but these are few and far between. Mostly, this novel is polished and professional-looking. I’m really looking forward to reading the sequel and finding out what happens to Brin.
Posted by Esther Jones at 3:03 PM 2 comments:

If I Had It My Way


I just love this song. There are so many great lines, especially in the first verse. And it made me think about what my characters would want, if they "had it [their] way." What about you? What would your characters say?
Posted by Esther Jones at 4:52 PM No comments:

I Miss the Fire

I play guitar and piano, and sometimes I write music. I recorded an mp3 of myself singing one of my songs and made a slideshow vid. Let me know what you think.

Posted by Esther Jones at 11:54 AM No comments:

A Child of Two Worlds

It's time for Round Three of the 50 First Lines Challenge.There were three winners of Round 2, and we are to pick one paragraph of those three and write a summary in ten sentences or less of what the story is about. I picked paragraph 2 by 4am Writer:


Nobody wanted to claim the abandoned baby on the hill. Not a single hunter from the King’s clan and not one farmer from the Queen’s clan knelt in admission. That hill, with its concealed scorpion pits and live landmines, was supposed to keep the two clans divided as part of the War treaty. But the baby had all the markings, proof that the hill had been crossed. He had the silvery eyes of the Kings and the ruddy skin of the Queens. His secret will not last long. In time, the family birthmark will bloom. Announcing to which hunter and which farmer the baby truly belonged. And then the spooks will come after them.

And here is my entry:

This is a story about a child growing up in a world divided by war, a world that was torn apart by betrayal. His silvery eyes and ruddy skin clearly show that he is born of both clans, and no one will claim him and admit to a dalliance with the enemy. However, as he comes of age, a birthmark appears on his body, clearly showing which family from each clan he springs from—for everyone in each clan has these birthmarks—and his parents are revealed to be the son of the chief hunter and the daughter of the head farmer. This revelation causes some consternation, and leads to some argument, for both families want to claim the child as their own as he is now displaying talent in the magic of both royal families. The child, now really a young man, was raised by a farmer family who treated him as a servant, and he wants nothing to do with the war or with either royal family, but he wants out of his current situation, so he allows them to fight over him until he cannot take it anymore and he calls up the spooks and sets them on his families. Spooks cannot physically harm anyone, but they are horrifying in aspect, and the superstitious farmers and hunters are terrified of them, and no one has ever been able to call up or control the spooks, so when the young man does this, he immediately has their complete attention. He declares himself the Ruler of both clans, and no one argues.

Campaigner Challenge #2
The second challenge for the Writing Campaign can be seen here. I wrote a scene with two characters from one of my WiPs. For another piece on Lance, see here. I would love feedback on this piece if you are so inclined. Please critique.

Christopher groaned and leaned back against the rusty supports under the crumbling bridge, gripping his blood-soaked leg. Lance tore a strip from the hem of his once immaculate white shirt, and wrapped it tightly around the gash. The red flow slowed, and Lance’s shoulders sagged as he sat back on his heels, brushing back his sopping, muddy hair. Though he had once been human, he often forgot how fragile the species were, like a burst of fireworks or like ripples in a pond—beautiful, yet fleeting.
Lance stared at the river, imagining that he saw shapes in the random patterns of water: a heart, a winking eye, a pear … then his gaze caught on the thin red line that joined the river near his right foot. He and his brother had once owned jackets in that shade, given by their mother for an early birthday. Raoul had been so proud of that coat! The twins had gone down to the seaside and were building forts with the small rocks that littered the shore when Raoul had slipped and fallen in. Lance had panicked, plunging in to pull his brother out, but Raoul was only worried about his new coat.
Posted by Esther Jones at 4:49 PM 16 comments:

I've entered the 2nd Round of the 50 First Lines contest over at the Accidental Novelist. Here are my five first paragraphs.


1. When Jim awoke on the morning of his 50th birthday, he had no idea it was to be his last day on earth. No one ever expects that it is their last day on earth; no one ever thinks that they will be abducted by aliens. Jim had always thought that abductees were just crazies. But then, it happened to him, and his life would never be the same.

2. Her job sucked her soul dry and killed her ambitions and dreams–but the pay was good. Following your dreams was all very well and good if you didn't have to eat or pay rent, but she was still mortal.

3. Opening his eyes, he at first thought it still full night, but he could feel the warmth of the sun upon his face–that witch had struck him blind! Forcing himself to a sitting position, he felt around for his sword, even though he was sure she would have taken that away too. But no; there it was right beside him. She was so sure of herself!

4. Tears flowed unheeded down his face as he stroked Arwen’s head, not caring who saw him grieving for his dying pet cat. His parents had given him Arwen as a kitten when he was only ten years old, and she had been his best friend—his only friend—ever since.