My husband Mark just started a blog. He's a musician and a poet. Check him out here: Hitting the Mark

Always be a Poet

Charles Baudelaire said, "Always be a poet, even in prose." Although I had not heard this advice until recently, I have followed this all my life. My earliest creative works were songs and poems, and I have always found poetry comes easier to me than does prose. I do love creating a plot and characters and telling their story, but there's something visceral about poetry that touches me deeply.

I also love reading good poetry; one of my favourites is John Donne. I once read one of his poems and didn't notice it was several pages long until after I finished. I usually prefer shorter poetry though, as I find that it is usually stronger. In my own poetry, I tend to write as few words as possible.

I have not written a lot of poetry lately and this saddens me. I have been focusing on short stories and flash fiction--which I do love--but I am going to return to my first love: I am joining October Poetry Writing Month (OctPoWriMo). I will try to write an poem a day for the entire month of October, and I will post them here on my blog.

I may be a bit of a germaphobe. When I use a public washroom, I don't like to touch anything. I always use the paper towel to turn off the taps unless there is no paper towel available, in which case I shudder as I touch the taps with my clean hands. I know those taps aren't clean because I just turned them on with my unwashed hands!

I hate air dryers in public washrooms. Who knows who might have touched the power button? With what on their hands? I use my elbow to turn it on. Same thing for paper towel dispensers that have that stupid little lever you're supposed to push with your fingers: I push it with my elbow.

And don't expect me to touch the door to get out either. I use the paper towel here again. I refuse to touch the door with my freshly washed clean hands. I know that not everyone washes their hands after they use the toilet, and that's fine for them, but then they touched that door! So I'm not going to touch it. Yuck. 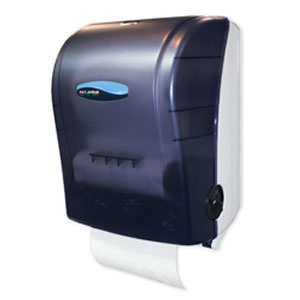 Where I work, we have "automatic" paper towel dispensers. They're not those cool electric ones, though. See picture? As long as the towel is hanging out, you don't have to touch anything. But often it isn't hanging out, and then you have to turn the thingy on the side to make it come out. I used to think these things were just glitchy, but then I saw someone actually lift up and tear on the towel, so they purposely left it not hanging out! Then I saw several other people do the same thing. Why would you do that?! Now I have to turn the thingy on the side, then wash my hands again before I can dry them!

I always always make sure to leave the towel hanging out for the next person. Courtesy, Golden Rule, good karma, you know?

On the bright side, I haven't gotten a flu shot in years, but haven't caught the flu. I must be doing something right. :)

What do you think? Am I a germaphobe?
Posted by Esther Jones at 8:40 AM 1 comment:

Can You Diffuse a Bomb?

The Spelling and Grammar Templar explains the difference between 'diffuse' and 'defuse': Diffusing the Situation.

I guess you technically could diffuse a bomb, but why would you want to?
Posted by Esther Jones at 12:01 PM 1 comment:


It's time for Knights of Microfiction, a bloghop hosted by Imagine Today and Write, Skate, Dream.

This time we are giving you 5 TELLING sentences to choose from.  The object is to pick a sentence and create a scene in 500 words or less that SHOWS what the sentence is about.

For bonus points, don't include the sentence you chose (or any alteration of it) in your scene. Your readers should be able to guess which one you described!

Here are the sentences to choose from:


Christopher laughed out loud, spinning around with his arms outstretched as if to embrace the world. “I’m alive!”

Unable to resist, Lance allowed himself a smile. “In a manner of speaking, yes.”

Christopher grabbed Lance, sweeping him off his feet and into a bearhug. “I can’t believe how strong I am!”

Lance stepped back and straightened his coat. Flicking imaginary dust from his sleeve, he replied, “Are you implying that I’m heavy? You should be more respectful to your sire.”

Lance grimaced. “I’d rather you didn’t. I feel old enough as it is.”


The following is my entry in Seuss' Pieces 2012 Writer's Week. The prompt I chose was "Reading music is like..."

Reading music is like seeing sound. The symbols on the page form themselves into a melody with harmonies and counterpoints, and I can almost hear the piece before I touch the keys.

Hearing music is like feeling fusion. The individual notes combine to create a complicated dance that fills my soul with joy, and I am lifted up.

Playing music is like controlling chaos. I create it, yet I am carried away by it, and I am free.

What Goes Around Comes Around?

Do to others as you would have them do to you. Luke 6:31 NIV
A man reaps what he sows. Galatians 6:7b NIV
Use every man after his desert, and who should 'scape whipping? Hamlet Act II Scene 2

This morning, on the way to work, we were trying to pull out into traffic, and no one would let us in. I commented that when I am part of the traffic, and I see someone trying to get in, I let them in. DH joked that he doesn't let people in so I should be driving since I have good karma.

Do you believe in karma? If you do good then good things will happen to you, and if you do evil then misfortune shall befall you. Of course, it's not that simple, but if everyone followed the Golden Rule (Luke 6:31), the world would be a much happier place.

Since I'm a writer, I was thinking about karma in writing. When my character does something good, should I have good things happen to him? I don't think that would be very interesting. What do you think? Most writing advice says to have bad things happen to your MCs.
Posted by Esther Jones at 8:55 AM No comments: