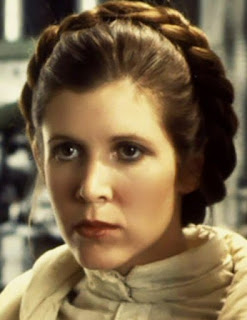 When I was a child, I didn’t know if women could be Jedi. I knew Leia was “strong in the Force,” but she was always so angry. If Luke was too much like his father, then Leia was surely much too angry to be a Jedi. We all know that anger leads to hate which leads to suffering.

Personality-wise, I identified with Luke’s passionate desire to save people and with Obi Wan’s quiet life of hermitude. As an introvert growing up with seven younger siblings, I yearned for quiet and solitude. And yet, I also loved the excitement of the battles. I cheered for Luke when he destroyed the Death Star and for Leia when she choked Jabba.

When the prequels hit, I discovered that women could be, and were, Jedi. They were in the background, but they were there, and they appeared to be treated as equals by the rest of the Order. They made little impression on me, however, beyond their existence. I could imagine myself a Jedi, but I didn’t personally identify with any of them.

I fell more in love with Obi Wan here, identifying with him even more strongly than before, with his seemingly contradictory personality. He hates to fight, yet is one of the best swordsmen in the Order; he’s an amazing negotiator, yet would rather just be alone. I hero-worship Qui Gon, with his disregard for rules and authority when he knows they are wrong, and I dream of being Qui Gon, but I am really Obi Wan. 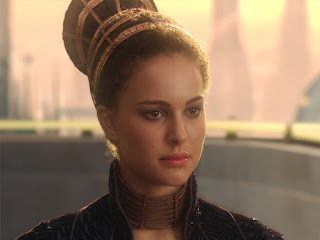 Padmé, like Leia in the original trilogy, is the lone main female character in the prequels, and I do love her. Unlike Leia, Padmé is not ruled by anger, and yet she never shows the slightest ability to use the Force. And she is not at all like me, with her fearless leadership and ability to stand before crowds and speak with authority.

I have always had no issue identifying with characters who are not my gender. King Arthur, Jim Hawkins, Jean Val Jean, Atticus Finch, Sherlock Holmes, Par Ohmsford, Alec Ramsay, Tom Sawyer, Luke Skywalker, Clark Kent, Bilbo Baggins, and Harry Potter each helped define my growing up into who I am today. And yet, I have a special place in my heart for Hermione, who loves to learn; for Menolly, whose love of music defines her; for Anne Shirley, who lives and breathes poetry; for Lucy Pevensie, who believes despite what others say; for Alice, who tries to make sense of a senseless world; for Meg Murry, who will stop at nothing to save her little brother; for Wendy, who is a surrogate mother to a bunch of boys; for Belle, who sees beyond the outward appearance to the heart. These too, made me who I am. 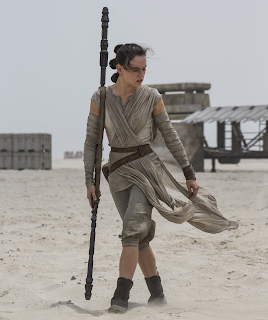 In The Force Awakens, I identify most strongly with Finn, who balks at the order to kill, who runs away and then comes back to help a friend. And yet… and yet. Rey, who is comfortable alone, who is confident in her own abilities, who feels as protective of Finn as he is of her, is finally—finally!—a female main character in which I can see so much of myself. Little girls today have a hero in Star Wars who shows them that they too can be a hero, that they can be a Jedi. Finally, because of Rey, I truly can see the Jedi within me.

Posted by Esther Jones at 3:56 PM No comments: