Won't someone save the children?
I fear nobody will.
They're hiding in the shadows
As Darkness comes to kill.

They've barely started living,
But evil doesn't care.
This killer has no mercy;
Not one of them he'll spare.

The boy who dreamed of freedom:
He is the first to die.
He wanted peace and justice;
He never ceased to try.

He lived life with a passion;
He loved with all his heart.
You see, he felt too strongly
From the very start.

I hear the cries of younglings
As they're sent into the grave
By hands that should protect them.
He is once again a slave.

Review of The Clockwork Giant by Brooke Johnson 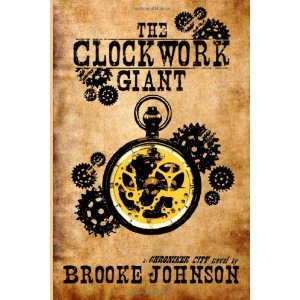 I just finished reading The Clockwork Giant by Brooke Johnson on my Kobo. It's a good first novel, but it could have been so much better. This reads like a second draft, not a polished manuscript.

Petra is an engaging, relatable character most of the time. I cannot say the same for Emmerich; I really didn't like him at all. He keeps waffling on the important things, changing his mind about what he wants. Petra deserves someone better, someone who can give her all of his heart.

Many turns of phrase in the novel are awkward and/or overly simplistic, 'telling' rather than 'showing.' I don't think there's one complex sentence in the whole thing. This does make it an 'easy read' for those who don't really read or for whom English is a second language, but I found it frustrating. I like my reading material to have a mixture of complex and simple sentences, to break up the text and give it some interest.

It feels like the author sometimes manipulates the plot to make the characters do some things that don't really fit the picture she's created previously. Petra forgives Emmerich way too easily for the stupid things he does, and another character changes sides without enough motivation.

At one point, a character is burning to death, and she carries on a calm conversation with another character, ignoring the pain of the fire in her flesh. This is completely impossible, as this pain is probably worse than anything she could have ever felt or imagined before; there is no way she'd be able to speak clearly and intelligently.

There are some wonderful descriptions of the city and university, and Emmerich's 'copper eyes' are referred to numerous times, but I have no idea what Petra looked like. I tend to do this in my own writing as well, so I notice it as I'm working on it myself: there are too few descriptions of characters. We should 'see' the story, not just be told what's going on.

I enjoyed finding out what happened to Petra, and I think the plot was very good. I'm looking forward to Ms. Johnson's next novel; I'm sure her skills will be sharpened and her writing will be improved with each successive piece she creates.
Posted by Esther Jones at 1:16 PM 1 comment:

Email ThisBlogThis!Share to TwitterShare to FacebookShare to Pinterest
Labels: a girl who reads, book review, writing, YA fiction

Today is the first challenge for the Campaign over at Rach Writes. The challenge is to write something in 200 words or less starting with the line "Shadows crept across the wall." I chose to write a poem, as that is my first love in writing, and the genre I am most comfortable in. According to MS Word, it is 83 words (I usually write much shorter than required). It is written in trochaic tetrameter, if anyone cares. ;)

Shadows crept across the wall;
Anna watched the darkness fall.
Nothing could defend the light;
Nothing could stave off the night.
Yet she sat and watched the sky,
Watched the clouds drift slowly by
While the sun sank in the west
And the world went to its rest,
For she loved this time of day:
Nature’s colours turning grey,
People slowing down to sleep,
Praying God their souls to keep;
Setting sun may seem an end,
But she calls the night a friend.
-Esther Jones
Posted by Esther Jones at 12:27 PM 40 comments:

Are Children Smarter than Preteens?

YA fiction annoys me. It's hard to explain why, but I'll try. Whenever I read it, I get so irritated; I feel like the author is condescending me. The sentences are so short and basic, and the authors don't seem to know how to show rather than tell.
I'm sure not all YA is like this. I've only read a few. The ones I have read usually have good plotlines and interesting characters, but the writing style is always the same, regardless of the writer. I don't know why this is the case.
Children's fiction doesn't seem to be like this. Books like The Hobbit and Harry Potter don't suffer from this "talking down" to the reader problem. For some reason, society seems to think that small children can comprehend good writing, but preteens must be given this awkward easy-to-read stuff. As if we get stupider as we get older.
Have you ever noticed this (if you've ever read anything labelled "YA")? Do you think this is good or bad?
Posted by Esther Jones at 8:11 PM No comments:

Vicki Orians challenged us to write a love letter from one of our main characters to another. I'm going to do this a little differently; this won't be romantic love. So this is Lance, the main character of my untitled WIP, writing to his deceased twin brother.

Ah, Raoul! I miss our conversations; I even miss our arguments. We always said we'd live forever, but we meant to do it together; eternity is lonely without you. I would do anything if you could live again.Vengeance was supposed to make it better; but vengeance only made things worse. Now your murderer hunts me with the strength and skills I gave him and with a great hatred in his heart for me and all our kind. I fear that this is my fault, for instead of killing him for killing you, I turned him into one of us, turned him into what he hated. For so long, I hated him for what he did to you; but now I only pity him for he is like me: forever alone.

I was always so proud, so proper. I don't remember if I ever told you that I loved you. I wish that I had, even though I know you would have laughed at me and made some joke; I miss your jokes. You were always so impulsive, so happy, so alive.

Your brother,
Lance
Posted by Esther Jones at 6:30 PM 2 comments:

My main computer is down for the count. My brother-in-law thinks he can get it running again, but until he can get to it, I'm stuck using my three-year-old mini netbook. It's got a 10-inch screen and only 1GB RAM, so it's rather difficult to do much with it. Therefore, my writing, blogging, etc. is suffering.

In happier news, I got to see and hold my brandnew niece yesterday. She was born on Feb. 5 and was in the hospital for a few days as she was early. She is absolutely adorable. :)
Posted by Esther Jones at 3:44 PM 4 comments:

I strongly believe that sometimes the shortest poems are the most powerful. It took me a while to learn how to stop before the poem got too long.

Buried underneath
The strains
Of life
The still small voice
Strives
To be heard
-Esther Spurrill-Jones
Posted by Esther Jones at 12:29 PM 1 comment:

Sometimes babies make me sad. Now, don't get me wrong; I love babies and children. I want to have at least 4 or 5 of my own someday. And there's the rub: I have none of my own. Seeing those adorable little faces and hands and feet...it just makes me so happy and yet a little bit sad: happy that someone was blessed with a child, but sad that I was not.
I believe that someday I will have at least one baby of my own. I feel that God told me that it will happen; those were the words I heard: "It will happen. Maybe not right away; but it will happen." I'm holding onto that, through each month of disappointment, through each negative pregnancy test. It will happen.
Someday, a baby will make me so happy.
Posted by Esther Jones at 5:42 PM 1 comment:

I've signed up for this thing on Rach Writes. It's a really cool idea to help writers gain some exposure online while helping others and networking. I can't wait to see how it goes and meet some new friends. For more info, click on the above link, and read all about it.
Posted by Esther Jones at 12:13 PM 8 comments:

Love is Not Ephemeral

I was listening to the radio yesterday, and a song inspired me to write this. It's still a rough draft, but I thought I'd publish it anyway since I'm not sure where I'm going with it.

Love is not ephemeral
Love is like a living thing that grows and thrives with care
Posted by Esther Jones at 9:11 AM No comments:

Yeah, I know the post title is a little morbid; it's the title of today's piece, which isn't really all that morbid. I swear.
Someday, I'm going to make this into a novel. If I can just stop procrastinating...

"When darkness and death
Come upon us,
One who is two shall save us.
Eyes as the day,
Hair as the night;
No evil shall escape his might.
He bears the mark of one and two
Left and right upon his back..."

So it was written in the sacred writings of Lumilune. It was only a fragment, like most of the verses, yet it held great meaning. One day, great trouble will come upon the land. However, a saviour will rise.

Some didn't believe. There are always those who don't believe. Many people think the Guardians are only a story for children and magic is merely illusion. Although misguided, they are not so wrong - or so dangerous - as those who follow Tansa. The Tansans are best avoided. They only cause trouble.

Regardless of belief or disbelief, the prophecy was true . And when the Tansan armies of Saybol the Dark and his black-cloaked ally who called himself Death attacked the people of Lira, many who did not believe began to wonder...

Posted by Esther Jones at 6:25 PM No comments: