My Review of Man of Steel

I've mentioned before that I have a thing for nice guys. One of my earliest geeky crushes was Clark Kent, who is one of the nicest guys (if not the nicest guy) in comic books. From a very young age, I wanted to be Lois Lane. Although, she can drive me crazy with the blind stupidity some writers give her. (Seriously, she’s an investigative reporter who is trying to find out who Superman really is, and Clark Kent works with her, and they end up dating even. How she doesn't figure it out has made for some really convoluted atrocities of plots.) 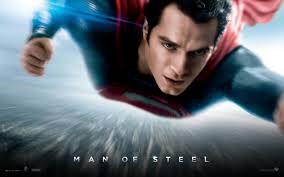 This past Saturday, I watched the new Man of Steel movie. I love this Lois Lane. The writers haven’t handicapped her with the unreasoning blindness I hate so much. I want to be this Lois Lane. And I have a new favourite Superman movie.

Before this past weekend, there was one movie on the list of “Movies That Made Me Cry Within the First 10 Minutes:” Up. Now, there are 2 movies on the list. The opening sequence of Man of Steel gives us Kal El’s birth, and follows the events leading up to when his parents, Jor El and Lara, send him to the stars. Lara’s pain at being separated from her newborn son was so real, so raw, I couldn't hold back the tears.

It is very difficult to write a character like Clark Kent, and do it well. Not only is he a completely good person, he is invulnerable. Most enemies can’t come close to being a real threat. Bullets bounce off him, he can walk through fire untouched, and he can fly. The only real weakness he has is to kryptonite radiation.

Smallville does a really good job of humanizing Clark, and giving him some non-physical weaknesses, but the movies have to create a bigger spectacle, give him an enemy that threatens him physically. One movie I watched a few years ago (I think it was Quest For Peace), created an enemy who wore a suit that essentially stole Superman’s powers. The stronger Superman was, the stronger the bad guy was. I seem to remember Lois and Jimmy placing a piece of kryptonite on Superman’s chest so the bad guy would be weak enough for the police or the army or something to capture. It wasn't a very good movie.

Man of Steel, however, has an excellent villain. General Zod isn't evil for the sake of being evil. He doesn't want power for the sake of power. He is that rare and wonderful antagonist who believes that he is right, that what he is doing is the best thing he can do. And what he is trying to do isn't completely wrong; it is his methods that bring him into conflict with Clark. And the conflict isn't merely Clark vs. Zod. SPOILER ALERT! Clark has only recently discovered that he is from Krypton, and that the planet died; Zod is another survivor, a fellow Kryptonian, and he offers a chance to rebuild their world. They don’t have to be the last Kryptonians. However, in order to do this, humanity must be destroyed. No matter what he does, Clark loses: if he joins Zod and rebuilds Krypton, his adoptive world and people are lost; if he stops Zod and saves Earth, his birth people are lost. In the end, he makes the only choice he can, considering his character.

Before he knows what Zod wants, though, Clark has another choice to make: Zod threatens to kill every human on Earth if Kal El doesn't surrender himself. Clark hesitates, not because he fears for himself, but because he doesn't trust Zod not to kill everyone either way. He’s right, of course, Zod’s plan has always been to build a new Krypton on the bones of the humans who stand in his way. Again, Clark makes the choice that is in character.

And here is where the movie got really interesting for me.

The original purely good person, Christ Jesus of the New Testament, is the model for everyone who follows. In university, I learned that a character who fits this mold is called a “Christ figure.” I am fascinated with this idea. There are many characters who can be said to fit in some way or another (few fit perfectly). Aslan, Gandalf the Grey, Frodo Baggins (even Aragorn Elessar), Luke Skywalker, and Sailor Moon are just a few.

In Man of Steel, Clark Kent is 33 years old, which is the age at which Jesus began his ministry. Clark is not of our world, and his father sent him here. Most telling of all, when he surrenders to the military so they can “hand him over” to Zod, he makes it very clear to them that he is in control, not them. Just like when Jesus said, “I lay down my life... No one takes it from me, but I lay it down of my own accord.” (John 10:17b-18a NIV) Of course, Kal El doesn't actually die, but he does have to make sacrifices, like I mentioned before.

This is the first time I've really thought of Clark Kent as being a Christ figure. I can’t believe how blind I was (maybe I have more in common with the old version of Lois than I thought). I guess I never really noticed because he’s never sacrificed himself before. (Or did he? What about the Doomsday plot in the comics? Maybe I am blind.)

Now, this is a summer blockbuster movie, so they had to include some big explosions and the like. And they gave Superman an enemy who can actually threaten him. Zod is from Krypton, so our yellow sun gives him the same powers it gives Kal El. This makes him Clark’s equal physically. Furthermore, Zod was born to be a warrior and has trained his entire life. Clark grew up on a farm, and his greatest physical struggle was adapting to an alien atmosphere, which wasn't really that hard. Clark has never had much trouble with anything physical. He can lift anything, and nothing on Earth can hurt him. Zod and his allies are a shock to him.

And Clark is alone in his fight. Lois and the “ghost” of Jor El (some kind of computerized construct of his memories) do their best to help, but when it comes down to it, Clark must face Zod alone. And Zod is not alone; he has a squad of Kryptonians with him. So truly, this is a fight that Clark cannot hope to win. Yet, somehow, he does. I’m a little hazy on the details here, but it seems that 33 years spent adapting to Earth’s atmosphere gives him that edge he needs, or something.

After the obligatory fight scenes between Clark and the Kryptonian criminals, the movie ends with a kiss between Lois and Clark and a new, uneasy truce between Superman and the military. I walked out of the theatre unsure how I felt about the film as a whole, and I’m still conflicted. It was definitely the best Superman movie I've seen, but the climactic fight was confusing and strange, and the ending was disappointing. I loved it, but I wished for something more.
Posted by Esther Jones at 1:38 PM