There's a lot of love for bad boys. The leather-clad, sneering jerk seems irresistible. Fiction tells us that nice guys finish last, and the bad boy gets the girl. Well, the bad boy who learns something and kinda turns out good by the end. Nice guys are boring, plain vanilla. Bad boys are fascinating, tasty tin roof sundae.

I've always liked Han Solo, but my favourite Star Wars character is Luke Skywalker. Why? Because I have a thing for nice guys. Yes, I'm weird. I'm attracted not to the testosterone-driven type with an attitude and snappy one-liners, but to the kind, gentle, maybe a bit nerdy, nice guy. 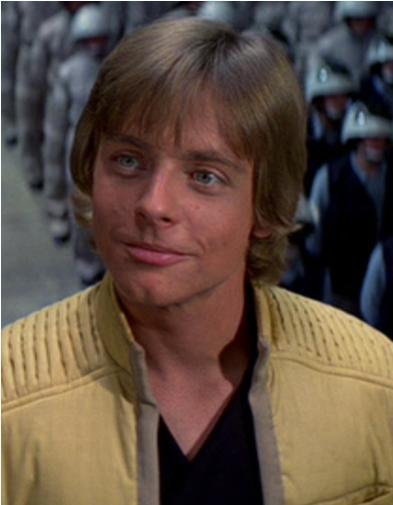 I've recently started watching Dr Who on Netflix, and I've noticed that the Doctor is a truly good person. He always tries to do the right thing, and he is devastated when someone dies (anyone, even an enemy). I love this quality in a character.

I've read that Han Solo is the true hero of Star Wars because he grows and changes throughout the trilogy, learning to care about others and not always put himself and his paycheque first. It is argued that Luke doesn't change and grow since he starts out good and nice. I would argue, however, that Luke starts out whiny and immature, so he does too change and grow. Character growth does not have to be so simple as a Han Solo type of arc. There are many ways for someone to grow and mature.

Do you like bad boys or nice guys? If you're a writer, which do you prefer to write?
Posted by Esther Jones at 10:55 AM