What is a Tween?

You may have heard the word "tween" used lately--a lot. Most people who use it mean a preteen, "a person who is between the ages of 10 and 12 years old" (Wikipedia, Tween) and I've heard people say that it's a "new word." However, I first read this word years ago, in a little book series called The Lord of the Rings, which "was written in stages between 1937 and 1949" (Wikipedia, The Lord of the Rings). In Tolkien's novels, tween is used "  to refer to Hobbits in their twenties: "...tweens as Hobbits called the irresponsible twenties between childhood and the coming of age at thirty-three."[43] In this context, the word is really either a shortened version of between or a portmanteau of teen and twenty, and in either case has no connection to "teens," preteens or the American marketing niche" (Wikipedia, Preadolescence). I think from this it's quite clear that it isn't a new word.


Every time I hear the word, I think of these guys: 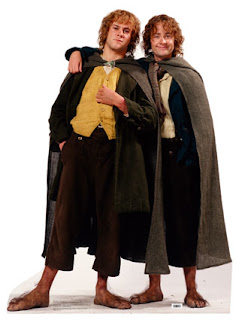 We were tweens before it was cool!


Merry and Pippin are the archetypal tweens in my mind: fun-loving young people who don't take life too seriously and offer some much-needed comic relief.
Pippin: Anyways, you need people of intelligence on this sort of... mission... quest... thing. Merry: Well, that rules you out, Pip.


I for one am going to continue using tween to refer to people like Merry and Pippin. What about you? What do you think?
Posted by Esther Jones at 10:10 AM