Pirates of the Caribbean: At World's End - Do Absurdities Work?

Warning: This post contains major spoilers for the film Pirates of the Caribbean: At World's End! 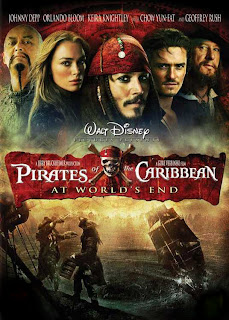 I recently re-watched the 3rd Pirates movie, and I was struck by an absurdity near the end. The rest of the movie is strong storytelling. I like how the writers threw so much at Will and Elizabeth, and had them questioning their love and trust for each other. This made their characters stronger and more realistic.

And I love all the twists and turns in the story. As a voracious reader, who has read thousands of stories, nothing is more boring to me than a plot I've seen again and again with an ending I can see coming a mile away. Even watching it through for a second time, I was surprised by twists I hadn't remembered.

I don't have a problem with the tragic nature of the ending. Things don't always turn out well, and often I prefer stories that don't have a traditional "happy ending." There's something terribly romantic about how they get married, and then he dies, and then he comes back but now he's the captain of the Flying Dutchman in Davy Jones' place.

The part that bothers me is summed up in the following exchange:

'Bootstrap' Bill Turner: This ship, it has a duty. And where we are bound, she cannot come. One day at shore... ten years at sea. It's a heavy price for what's been done.
Will Turner: Depends on the one day.

Ten years??!! Seriously? It would have been tragic if it was one year. Ten is completely over the top. In ten years so much could happen. If they happen to conceive a child during that one day, that child will be ten years old before s/he sees his/her father. Will may not age now that he is immortal, but Elizabeth will. And in ten years, she will age a lot. Say she's twenty at the beginning of this--she'd be sixty by the time they have their fourth day together. It's absurd.

But does it work? Writers are often given the advice to throw as much adversity as you can at your characters because that is what shows their character. Is there such a thing as too much? Is ten years apart too much? What do you think?