The History of Darth Quisling

I've been always been fascinated with that scene in Return of the Jedi where the Emperor is trying to convince Luke to kill Vader. He's trying to be tempting, and he just comes off creepy and pathetic. If Luke was going to kill somebody there, it should be him, not Vader. And this idea was born.

The History of Darth Quisling 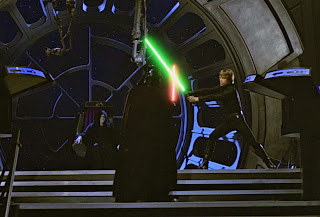 After Luke's final battle with Darth Vader, he stood over the fallen Sith Lord. He had just cut off Vader's sword hand, sending hand and saber plummeting out of sight. The Emperor approached, praising the young Jedi and encouraging him to finish his father. Enraged, but suddenly realizing who it really was that he hated, Luke spun and threw his lightsaber at the Sith Master. Palpatine had no time to react. Luke's saber passed through his decaying body, leaving a smoking hole in his chest. As he stood stunned, Luke leapt at him, snatching his saber from the air as it returned to him, and slashed the Emperor's head from his shoulders. The lifeless body of the most powerful man in the universe fell helplessly to the floor.

Luke stood over the body, a strange joy coursing through him. He had liked killing this old man. Horrified at himself, Luke deactivated his lightsaber and stared in shock at the body. He didn't hear Vader approach, didn't know his father stood watching him until Vader spoke: "Luke?"

The young man raised his head and stared at his father. "You're free," he whispered.

But Vader shook his head. "No," he said, almost sadly. "And neither are you."

Luke and Vader escaped the Death Star just before it exploded. Vader set course for Coruscant. Luke was very quiet. He was unsure why he went with Vader. He did not seem to be a prisoner of the Sith Lord; in fact, Vader didn't order Luke to come with him and they traveled together companionably. Luke followed his father willingly and Vader didn't seem surprised.

Upon their arrival at Coruscant, Vader took charge of everything. With amazing skill, he stepped into the void left by Palpatine and gathered the reins of power into his hands (first, he had another robotic hand made to replace the one he had lost). Throughout all of this, Luke was by his father's side.

As soon as he had cemented power for himself, Vader declared himself Emperor. Then he began to train his son in the Dark Side of the Force. Luke wondered why he had ever feared the Dark Side; it was not like Yoda and Obi-Wan had said: he was only accepting a part of himself that he had long denied. He was finally complete. He was Darth Quisling.