Today's prompt is purple, and the suggested form is the Cascade. I thought about it for hours before my sister suggested (mostly joking) that I write about Hawkeye (Clint Barton) because, in the comics at least, he wears purple. I decided to write about Clint and Natasha (Black Widow) because their role as the humans among gods and superheroes fascinates me. If you've watched the Avengers movie, this poem will probably make more sense than if you haven't, though you might be able to follow along anyway. I'm not sure. 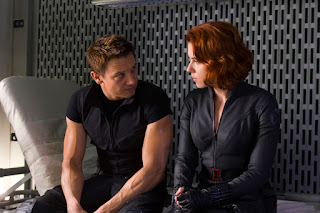 I’ve got red in my ledger.
Monsters and magic—
Nothing we were ever trained for.

Nat goes to the villain,
Conjures some tears:
“I’ve got red in my ledger.”

Clint wakes from the nightmare again and again
Where he served the
Monsters and magic.

We stand shoulder to shoulder with gods and heroes—
Only our wits and skills to face
Nothing we were ever trained for.