That's Not Me--That's My Sister!

I am two years older than my sister and people always thought we looked alike. I have red hair and she has brown, but they still often thought we were identical twins or something. Even my parents would often start to say 'Charlotte' when speaking to me or 'Esther' when speaking to her. We have always been best friends, so we did almost everything together. I got really used to being called Charlotte throughout high school and in activities we did together. When I volunteered at summer camp when I was 17 and she was only 15 so too young, I went almost a whole summer without being called Charlotte. Then, on the last day of camp, my whole family came to the last day BBQ and Charlotte went to my cabin to pack my stuff while I helped to clean up. One of my camp friends saw her and thought she was me. lol 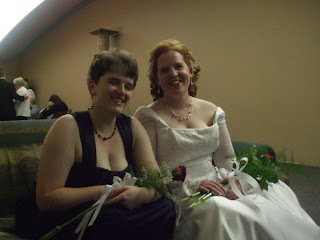 Charlotte was my maid of honour. (I'm the one in the white dress.)


I realized that I can't think of a single example in fiction where this happens to a character (except for actual identical twins). Most fictional characters don't even have siblings. When a set of identical twins are mistaken for each other in fiction, it is often because they planned it (eg: the Weasley twins from Harry Potter, Bridget & Siobhan from Ringer).

Can you think of any examples in fiction where a character is mistaken for or called by the name of his/her sibling who is not an identical twin?

I think I might use this in a future story. Do you think you might?
Posted by Esther Jones at 8:38 AM