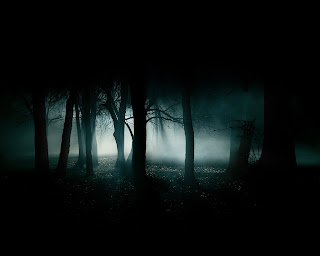 As the trees closed in, he quickened his steps, no longer caring if she heard him. She did, and she stopped and turned, smiling as she saw him coming.
He waited until he was close enough to touch her before drawing the knife and slipping the leather sheath from its blade. She caught the movement and looked down, a small frown creasing her brow at sight of the blade shimmering in the moonlight that filtered through the branches above. As she raised her eyes in question, still not considering that he might be a danger to her, he stepped forward and plunged the silver blade into her heart.
Her eyes widened and she grabbed at his hand—too late. As her blue eyes faded to grey she whispered, “Why?” But he gave no answer, yanking his knife free and stepping back as she fell to her knees, her strength leaving her. He pulled a rag from another pocket and wiped the blade, careful not to touch it.
She toppled sideways into the litter of leaves and twigs, her hands futilely trying to find something to hold onto, something to save her. Disbelief and betrayal shone from her eyes. He watched impassively and waited until she stilled and her body dissolved into dust, disappearing into the detritus, leaving no trace of her existence.
He sheathed his knife and returned it to his pocket. Tilting his wristwatch, he caught a beam of moonlight. It was still early. There was time for another hunt tonight.
Posted by Esther Jones at 3:12 PM