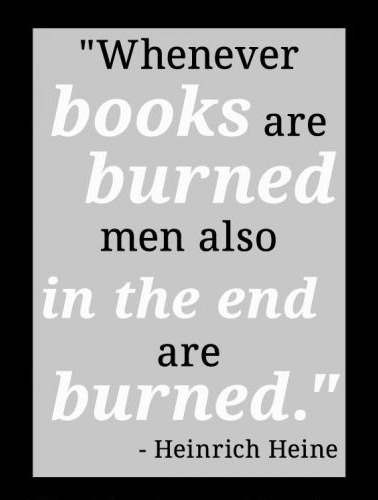 There's a picture circulating around the Internet; I've seen it on Pinterest a couple of times, and I think I saw it on Facebook once. It depicts the scene from the beginning of The Lord of the Rings: The Fellowship of the Ring where Isildur took the Ring into Mount Doom and then refused to burn it though Elrond begged him to do so. However, someone has photoshopped a copy of Twilight (the book) into the image in place of the One Ring.

Now, I am not a Twihard. I will admit that I read the books, but I wasn't that impressed with the film versions, and I don't think the books are great literature either. I agree with the prevailing opinion that Bella is a rather poor role model for young girls. I did love Alice, though. And Team Jacob, ftw!

I simply have a problem with burning books–any books. I read Fahrenheit 451 a few years ago, and–in my mind–it is a horror story. The thought of burning books makes my skin crawl. It makes me sick to my stomach. It gives me the shivers.

Besides, aren't there worse books? For the record, I would be just as upset if someone were to burn a terrible book, a book I hate. Why should anyone's opinion decide which books are worth saving, and which ones should be burned? How do we decide who decides? The book I hate might be loved by someone else. The book I love might be hated by someone else. Best not burn any books at all.

There are certain books I will never read. But I will still defend their right to exist. And I definitely won't condone burning them. In fact, I would fight to save them from burning.

I thought about finding the picture that started all this, and linking it here, but I decided against it. I don't even want to look at it, and I hope you don't want to see it either. Or am I crazy? Am I the only one who feels this strongly? Do you think there's ever a case where burning books is justified?
Posted by Esther Jones at 5:03 PM